Explore the rich marine life of Cabo with our various Whale Watch andamp; Snorkeling tours. Seasonally, from January to March, Humpback Whales and Gray Whales migrate into the area. The Humpback whale spends their summers feeding in the northern rim of the Pacific, especially along the coast of Russia and Alaska.

In January, the Humpback Whale begins a leisurely journey south through the waters of the Pacific until they arrive on the coasts of the Hawaiian islands and western Mexico. These whales generally stay until March or April when they begin a slow trek up north again. The Gray Whale travels down the western coast of North America from the Arctic Ocean. These whales have spent the summer feeding and now they will travel down to waters of the Baja California peninsula where they will breed, nurse, and raise their young.

Other whale species that have been sighted less fequently in Cabo San Lucas are Sperm Whales, Blue Whales, Bryde's Whales, and Fin Whales. There are two major types of whales, baleen and toothed whales. Baleen whales, such as Humpback, Gray, Fin, Byrde's, and Blue whales are all Baleen whales, meaning that they have long hair-like structures in their mouths used to filter for smaller marine organisms for consumption. Toothed whales, such as the sperm whale, have a more typical form of teeth and they generally consume a diet of fish and squid.

Whales are the only mammal species in the world that may live their entire lives in the open oceans. Because of this, the lives of many whales remains to this day a mystery. In fact, some species of whale travel over 10,000 miles per year. Because of their hydrodynamic body, they can move swiftly and easily through the ocean. They have been considered the world's long distance travelers for this reason.

Like humans, whales are warm blooded mammals with mammary glands, lungs, and hair. They are also known to be highly intelligent. Whales can be observed performing magnificent tricks in order to attract potential mates. One trick, the breach, is when a whale jumps into the air with over half of its body leaving the water. The blow happens when whales come to the surface to breathe, and the result it a cloud of mist and water which sprays out of its blow hole. A pectoral or tail slap occurs when the whale forcibly slaps a flipper or tail onto the water's surface, resulting in a loud cracking sound. It is suggested that this is a signal to other whales that a female Humpback is interested in mating.

Another trick, known as spy hopping, occurs when a whale rotates its body vertically and slowly lifts its head out of the water, turning it around slowly to observe the surrounding environment. One of the more amazing tricks is the peduncle throw, which is performed by a whale when it powerfully throws the lower portion of its body sideways above the water in an arc, and forcibly slaps the surface. This act is suggested to be associated with male Humpbacks showing off for potential mates. 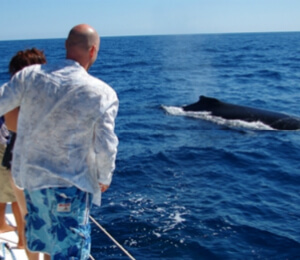 If you're looking for an experience of a lifetime, then look no further than this sailing, snorkeling and whale watching cruise. You'll be on your own personal sea safari and experience the best Cabo has to offer.

Our Promise To You